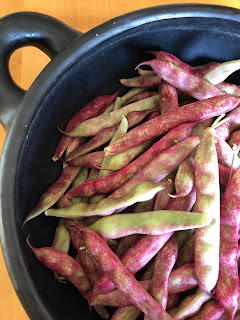 This is a Seed Story with a recipe for Chilean Shell Bean Soup (to skip to the recipe please scroll down).

The importance of a seed's ancestry and its journey parallels that of humanity, and increasingly we'd like to recapture the meaning and significance of our ancestral and heritage foods. I believe this is because seeds are the carriers of our cultures- they offer the comfort and spiritual nourishment we are often lacking. The beloved vegetables, grains and fruit of our people, whether we are immigrants, or from a certain region in the US, or Native American, these are precious parts of our cultural and ethnic wellbeing.

The stories of our seeds are important in honoring our origins and worthy of safekeeping.

Porotos Granados - My Seed Story
Porotos granados is a very popular dish in my home country of Chile. Poroto is the word for bean, and granado means shelled. It's also the name for the bean used to make this stew-like summer food.

Although I was born in Chile, my family immigrated to California when my brother and I were very young. While we were growing up we recall hearing our parents talk lovingly and longingly (a lot!) about a Chilean dish called porotos granados,  It was only as an adult that I realized they were referring to a type of dish made with shell beans, which is the literal translation of ‘porotos granados’. This thick soup is a popular summer dish made with fresh corn, shell beans and winter squash, flavored with sweet basil and paprika. They are also used as a dry bean.

The porotos granados seeds were sent to me by a generous gardener I met at the 2014 Annual Seed Savers Exchange Conference and Harvest, at Heritage Farm in Decorah Iowa. We sat down to lunch together at the conference to chat about gardening. As we chatted she told me she was going to Chile in a few months to work at a lodge with a chef (Mapuyampay Lodge Gastronomico, near Curicó). She wanted to experience working in the organic garden there, and to cook with the chef, Ruth Van Waerebeek, author of the book I have at home on Chilean food (The Chilean Kitchen). I was impressed by this serendipity! So I told her I would absolutely love to have seeds from the traditional foods, especially corn, beans and squash. In 2017 I received a stash of seeds from her collected from the garden at Mapuyampay. I am extremely grateful that she took the time and care to send them to me.
The beans look very similar to the cranberry bean seen in our farmer’s markets in California (sold as shelling beans). They also resemble the Tongue of Fire bean, said to be from Tierra Del Fuego, and could very well be the ancestor of the Italian cranberry bean as it migrated to Europe with the colonists. I did find a reference in a catalog for the traditional seeds of Chile, that the poroto granado is "reputed to be from Araucania" which is central & southern Chile, and unceded Mapuche lands (People of the Earth, or Land).
Porotos Granados Recipe
The following recipes were modified from the book by Ruth Van Waerebeek, The Chilean Kitchen. Used copies can be found on the internet.
Ingredients
Olive oil, or other vegetable oil
1 medium yellow onion diced
1 clove of minced garlic
Salt, paprika, pepper to taste
2 ½ to 3 lb of porotos granados (or cranberry beans) in pods (at the shelling bean stage)
2 fresh sweet corn cobs (about 2 cups of cut kernels)
1/2 lb of winter, orange fleshed squash (called zapallo comote in Chile)
8 sweet basil leaves or to taste
Method
Prepare the vegetables: shell the beans from their pods, cut the corn from the cobs, wash and chop the squash into medium-sized cubes.
In a large pot, add enough water to cover the beans and chopped squash, add a little salt and about 4 basil leaves. Cook over medium heat for about 20-30 minutes.
Sauté the garlic and onion in the oil (don’t burn) until translucent and soft; add 3-4 chopped basil leaves and the spices, stir and sauté for a few more minutes. Add to the beans when done cooking.
Puree ½ to ¾ of the cut corn in a blender. Add the cut corn and corn from the blender to the pot of beans (when beans are done), stir well, and cook for about 5-10 more minutes. The soup should be thick, and not too soupy- but add water if needed during cooking to thin it.
Serve with chopped basil on top, and if desired, drizzle “color chileana” on the soup (see recipe below).
Color Chileana or Paprika Oil (Color is pronounced as in Spanish, có lor, slight accent at the front end)
¼ cup oil or lard
1 clove garlic, crushed
½ tablespoon of sweet (or smoked paprika is nice too)
Heat the lard or oil in a small pan, add the crushed garlic and sauté gently for about one minute (don’t burn). Discard the garlic, remove pan from heat and stir in the paprika.
*Chilean food is fairly bland- so we sauteéd some ají verde with the onions for some mild heat, or you can add some smoked chipotle powder!*
Enjoy!
Photos: Patricia Larenas, Urban Artichoke
Posted by urban artichoke at 2:03 PM No comments:

As we launch into 2021, I look forward to continuing my work as a volunteer with Coop Gardens (Cooperative Gardens Commission), which I joined in April of last year. The organization was formed in response to the COVID-19 pandemic, with the goal of distributing free garden seeds to those most in need.
Who knew what this sudden and overwhelming global emergency would bring in the next months?
You can learn more about Coop Gardens and download their brand new report here.
Some of the ways I tried to support local organizations are below:
Not everyone has the luxury of land in which to grow their own food garden, so I propagated seedlings to plant at the Day Workers Center. They provide such valuable services for day laborers, including meals twice daily.

La Mesa Verde runs a wonderful and inspiring program that installs  raised beds for vegetable gardens in the homes of people in need, and provide training for new gardeners- find them on YouTube and see their videos in Spanish and English here.

Posted by urban artichoke at 10:33 AM No comments:

Saving Seeds from Your Garden

I'll be giving two presentations on the art and science of saving seeds via Zoom, through the Mountain View Public Library .

See the descriptions below:

You must register separately for each, part I and part II. See the links below:

Description: This talk is an introduction to the art and science of saving your own seeds. Learn the basic techniques for saving seeds from popular annual vegetable garden plants. Covered in part I: why we save seeds, the basic botany of flowers and pollination, saving pure seed and when to worry about species crossing.Vegetables discussed: lettuce, tomatoes, beans (includes peas), and peppers. Storing seeds will also be discussed.

Register for Part I: September 17, Part I

Description: this talk is a continuation of Part I, and will cover saving seeds from cucumbers and squashes, and biennial crops, such as brassicas (kale, broccoli etc) and carrots. If time allows popular herbs such as sweet basil and cilantro will be discussed. Plus simple ways to test the viability of your stored seeds (germination testing).

Resources for learning more about saving seeds and plant propagation will be provided.